One805 Live! Raises Critical Funds for Fire Departments in County 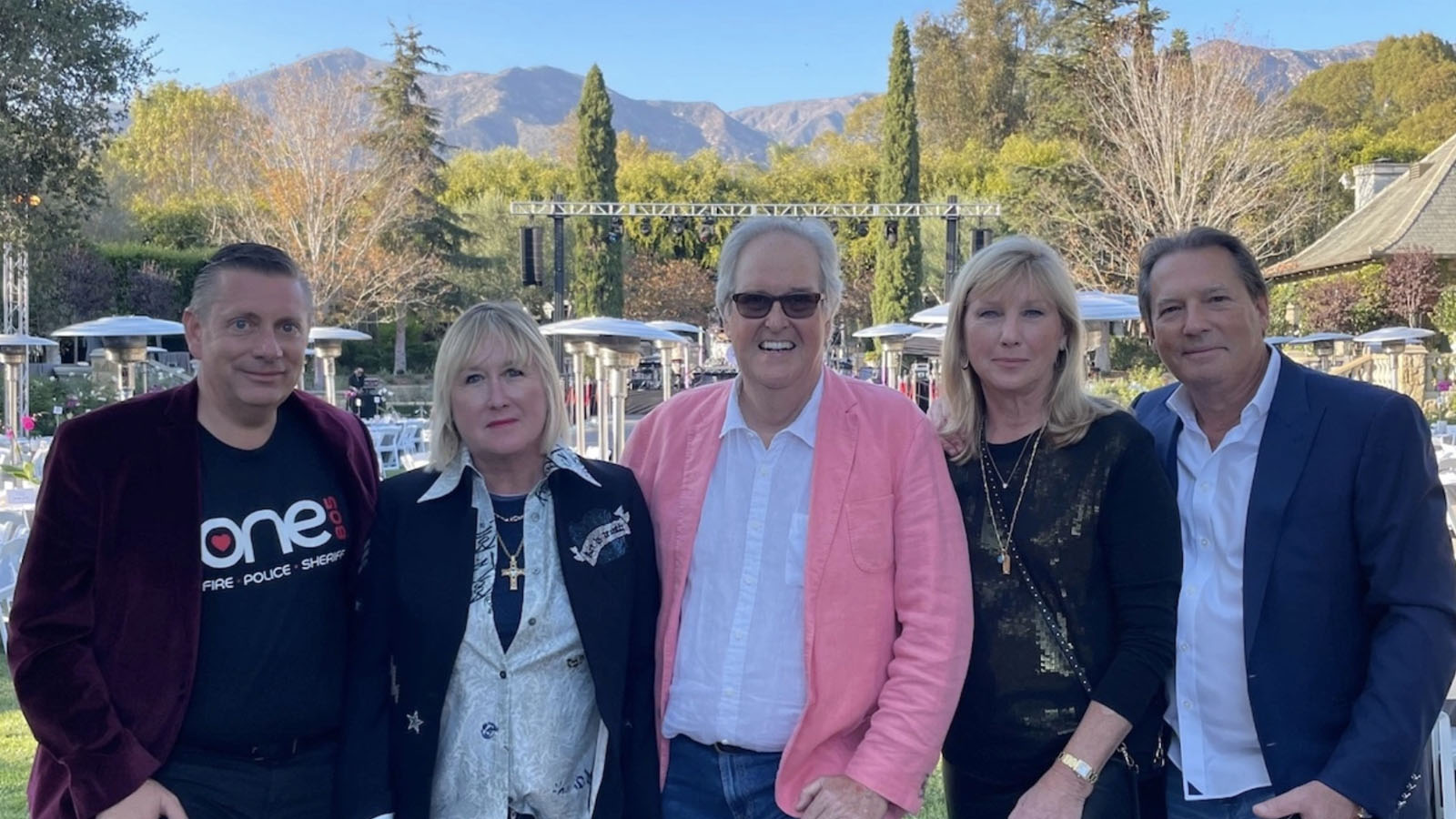 Chicago and Robby Krieger Perform at Fabulous Event On September 18, the nonprofit One805 held a fabulous soiree with cocktails, dinner, and performances by Chicago and the Doors’ Robby Krieger at the Winn-Twining estate in Montecito. One805 is hoping the event will net $200,000, which will fund equipment and other needs of fire departments in the county.

The 350 guests, many in Rock ’n’ Roll chic attire, enjoyed cocktails throughout the sprawling estate grounds and then an extensive, delicious buffet dinner catered by Via Maestra 42 in the gorgeous, spacious garden setting. Thanks to generous donors, more than 50 firefighters were in attendance. When darkness fell, tastefully illuminated trees, concert stage lighting, and a near full moon provided perfect illumination, while an abundance of space heaters kept everyone warm.

The brief program began with a troupe of bagpipers parading through the dining area. Santa Barbara County Fire Chief Mark Hartwig shared how S.B. firefighters have been rotating up north to fight fires for 30-day stretches, then off for only two or three days, and then back to the station or back up north, as new fires emerge while the Dixie Fire winds down. Hartwig also touched on the manifold challenges COVID presents for firefighters to safely live, train, and work together.

One805 Cofounder/Boardmember John Thyne presented three inaugural Heart of the Community Awards, which were statues designed by Lynda Weinman. Alan Parsons received the award for his role as music director and performer at the first One805 event, the 2019 Kick Ash Bash, which netted $1.7 million for first responder agencies. The other awards went to Ashley Iverson, whose firefighter husband died in the Thomas Fire and who started the Iverson Foundation for Active Awareness, and to Kim Cantin, who was recognized for her strength and courage after losing her husband and son in the 1/9 Debris Flow.

Natasha Bedingfield, who was supposed to perform, canceled two days before the show, but the resourceful One805 board managed to bring in Chicago, to the delight of the crowd, many of whom flocked to the dance floor as soon as the performance began. Following Chicago was Rock and Roll Hall of Famer Robby Krieger of The Doors performing with a band. Spontaneous auctions of a drum autographed by Chicago founding member/drummer and Rock and Roll Hall of Famer Danny Seraphine and a guitar autographed by Krieger together brought in $12,000.

One805 sprung up right after the Thomas Fire and 1/9 Debris Flow, staging the star-studded Kick Ash Bash. The five founders then decided to make the organization permanent to fund the needs of first responders that are beyond their budgets. This volunteer-led organization with only one part-time employee has distributed more than $2 million to S.B. County first responder agencies. The intent was to hold a mega event each year, with affordable ticket prices to make it an inclusive community event, but COVID put that plan on hold.

According to President and Co-founder Richard Weston-Smith, One805, which can disperse funds quickly, fulfills a need created by the limited resources and slow-moving budgetary process of first responder agencies. Grants are made to agencies countywide and One805 encourages the sharing of equipment among agencies. With the magnitude of fires this year, One805 decided to give event proceeds to fire departments.

Weston-Smith shared that his passion for One805 comes from a deep appreciation for the arduous work of first responders in keeping us all safe and the desire to have first responders be as well equipped as possible for the inevitable fires, accidents, crime, and other events that will befall our county. According to him, it’s high time for there to be an organization through which the community can support first responders countywide.

An Advisory Committee comprising 11 first responder heads (fire, police, sheriff) prioritizes funding requests, which the One805 Board honors. Though the departments seemingly would have competing interests, the process works well. S.B. City Fire Chief Chris Mailes shared how the fire chiefs in our county have long been a close-knit, collaborative group guided by the greater good of the county, not its individual jurisdictions. Santa Maria Police Chief Marc Schneider similarly shared how chiefs recognize that some requests are more mission critical than others and that departments often rely on each other for support, so equipment to one department benefits everyone.

The majority of fire department budgets go to personnel for 24/7 staffing, and grants from One805, according to Mailes, enable the departments to purchase equipment they otherwise would not be able to obtain, such as the Incident Management Team (IMT) trailer it received from One805 with Kick Ash Bash proceeds. When a major incident occurs, this trailer houses the large number of personnel from multiple agencies that these incidents require. One805 also funded an IMT trailer for the S.B. Police Department and one for the S.B. County Sheriff’s Office.

This year’s grants include one for a water tank for the county’s Firehawk helicopter. According to Mailes, this soon-to-be ready helicopter is a game-changer, offering increased rescue and firefighting capability, including night operations and high-capacity water-dropping capability.

Mailes expressed gratitude for the community support it receives through One805. The county, according to Mailes, gets more than the typical number of incidents and especially with our relative geographic isolation, requires a large public safety presence 24/7 to prepare for all hazards — fires, floods, earthquakes, search and rescue, and large-scale EMS incidents.

This year, One805 also will fund drones, which Schneider explained enable officers to check the interiors of homes and businesses from a safe distance. Other 2021 grants include funds for saws, rescue struts, face shields, and Rosetta Stone language licenses.

For coverage of other events, go to http://independent.com/society.

One805 announced the donation of $90,000 to Santa Barbara County Fire, specifically to expand the capability of the new SBC Fire Department 964 …

One805 is delighted to announce the donation of $90,000 to Santa Barbara County Fire, specifically to expand the capability of the new SBC Fire …